Bhutan, a country in the eastern Himalayas, issues postage stamps, which are gramophone records. Playing such a record – a stamp you can listen to folk songs or the national anthem of this Asian state.

Above the window of the Wawel Castle, the name of a friend “Pilch

Postage stamps are printed using various techniques. One of them is a steel engraving. In the process of producing stamps made with this technique, the engraver maps manually a graphic design of a stamp on a steel plate using a stylus – a miniature matrix of the size of a postage stamp.

A careful observer using a magnifying glass can discover the so-called writings, or rather pranks of Mr. Słania. This artist, by moving the design of the stamp to the matrix, secretly added various private contents invisible to the naked eye with the naked eye – the names of relatives and friends and their images, including their own.

What a stagecoach passenger should know. 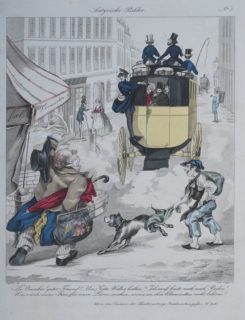 [“For God’s sake become (…)”, figure, XIX century]
“(…) The dropping of mail over the above time may not be possible, so the travelers, punctually at the Post Office, should leave before the departure of the Post Office – Do not stay in the city in front of the private houses, or the guest, who will be late, by himself it should be that the Post will leave without it. (…)
(…) They are clearly excluded from the journey by Stagecoach, small children (…) or by the breasts being, also people of insane senses, suffering convulsions, or visible pustules covered (…)
(…) It is forbidden to smoke and take dogs with you.
(…) Under the harshest punishment, it is forbidden for those who are not registered on the way to be picked up on the way, as well as stopping along the taverns, each traveling power is about the nearest Postal Service where it commutes. (…)
(…) In addition to the Personal Duty charge (…) Poczta, or whoever is from the Postal Service, has no right of the least, from the traveler demand Trilbaggt [tip], or any Bonifikacyi, about the abuses to the extent occurring, Dyrekcja [Poczt ] all reports will be grateful. ”

What can happen to a stagecoach passenger during a journey. 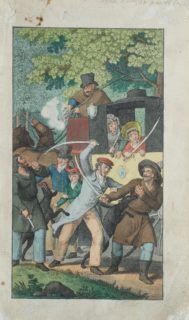 “In passing from Szczawnica to Stary Sącz, I experienced constant trouble due to the poor condition of coach no. 126 and the door does not close, so I was forced to hold the door within 5 hours by hand, the seats were so torn and hideously dirty that I renounced myself once to always travel by post. Łącko, July 23, 1892 (…) ”
(Book of complaints, post station in Łąck, 1861-1892)

“(…) Travelers with stagecoach should at every station find a clean, enlightened and tanned winter in order to let them rest without hindrance. In every such a room named passenger, there should be, at least two couches or sofas, two tables, a mirror, six chairs and a screen. Poczthalter should keep the traveler (…) “.
(Contract for the management of a post-lease station [in a sliding station] in Przyrów, 1839)

Postal shipments coming from the affected areas have been sanitized to prevent the spread of infectious diseases such as cholera, plague and smallpox. Initially used to smoke with herbs or wash with water and vinegar. In the eighteenth century, unlabelled lists were pierced repeatedly with a needle or other tools, and then kept above the smoke or vapor of sulfur or vinegar. Traces of such proceedings carry a letter from 1831. It was given in the border town of Strzałkowo (Prussian partition), in which travelers before entering the Kingdom of Poland held forced quarantine because of the cholera epidemic prevailing in Germany.

Museum exhibition hours
Today we invite from 10 to 16

I consent to the processing of my personal data in connection with the implementation of the application, i.e. in order to: eg give me an answer and make contact. Providing the data is voluntary, but necessary to process the inquiry, and the basis for their processing is my consent, which I can withdraw at any time. I have been informed that I have the right to access my data, the possibility of correcting it, requesting discontinuation of processing it, and lodging a complaint to the supervisory body. Personal data will be processed until consent is revoked. The administrator of personal data is the Museum of Post and Telecommunications in Wroclaw.